Jeffrey D is an Executive Chef and a partner in a local restaurant. He is responsible for creating menu items, ordering supplies and training the kitchen staff. He operates from a tiny office that was originally a storage closet located just behind the food prep area.

He called me because his desk and files were a mess and he couldn’t stand working in the chaos. I met with Jeffrey for a one hour consultation to determine what his goals for the office were and to map out his work flow.

Jeffrey’s obstacles to a clean desk

“Studies show that the larger the trash can, the more paper people will throw away.”

What was working for this busy Executive Chef?

Prior to our Desk Rescue session, Jeffrey removed an unnecessary filing cabinet, and a lot of the kitchen equipment from the office. He also installed Evernote on his desktop computer, his phone and his iPad. We had discussed this platform during the initial consultation. 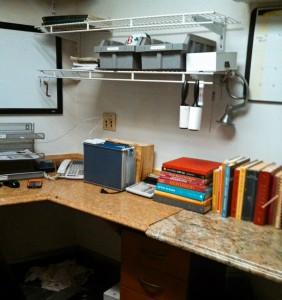 During the two and one-half hour desk rescue session we reorganized the remaining kitchen equipment onto a shelf unit at the end of the office. We moved his recipe books from a shelf that was sagging with their weight and lined them up along the back of the countertop desk area.

His existing three-tier shelf was emptied of papers and repositioned as an in/out box.

We created action files customized for his work including one called Idea Catcher which I loved. Jeffrey is a very creative Executive Chef and a lot of his desk top clutter was recipe and plate arrangement ideas.

We also set up a few reference files in a file drawer. We strategized about how he can use Evernote to create training manuals and as a place to store his recipe ideas.

The after picture isn’t magazine worthy due to the fact that the space is a restaurant supply closet tuned into an office and we had some serious time constraints. It is however very functional. This Executive Chef has a place to put every important piece of paper that enters his office and thanks to Evernote and a trash can, he is also eliminating a large amount of paper. He was very appreciative in fact, he wrote saved my life in the memo of the check when he paid for his desk rescue session. 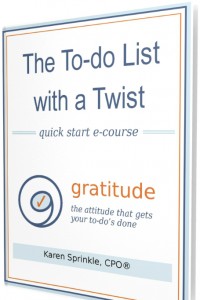 This is the tool that I use everyday to get my to-do's done. Subscribe to my blog and get your free To-do List with a Twist forms and the quick-start course.

Karen helped me set up a new filing system in my home office. I now have two file drawers in my office that are color coded and a storage area for archives that is out of the way, yet still easy to access. We organized my kitchen desk files using the Smead 3-D Viewable tabs which are wonderful! I don’t have “to do stacks” on my desk anymore! I wish I had called years ago! Thank you Karen! – Beth

My mission is to create an orderly space for my clients that provides a productive atmosphere for their daily activities and allows them to relax at the end of the day.
↑